Why Upgrade Your Intercooler?

It's often said that every mod is a compromise. Improve corning grip by stiffening the suspension, but sacrafice ride quality. Make more horsepower with a tune, but lose your warranty. Could there be a mod without compromise? Something that undoubtable just makes your turbocharged VW better? Today's topic: Intercoolers.

Oh and if reading isn't for you, we've got you covered with a video, too!

The Basics
Let's lay down a few fundamental prinicples about improving engine efficiency.

All in all, colder air seems to be like a win all the way around. We already talked about one way to improve this airflow with our article on intakes, but when it comes to turbo cars, there's more to the story than just an intake.

When we user a turbocharger or supercharger, we increase the density of the air, which comes with one unfortuante side effect -- the charged air drastically rises in temperature. In fact, the more we raise boost pressure, the more energy we add to the system, and part of the energy is converted into heat. With hot air comes everything we don't want, so we need a way to cool it back down again before entering the engine. Alas, the task of the intercooler. Plain and simple, the intercooler is a heat-exchanger which cools charged air. 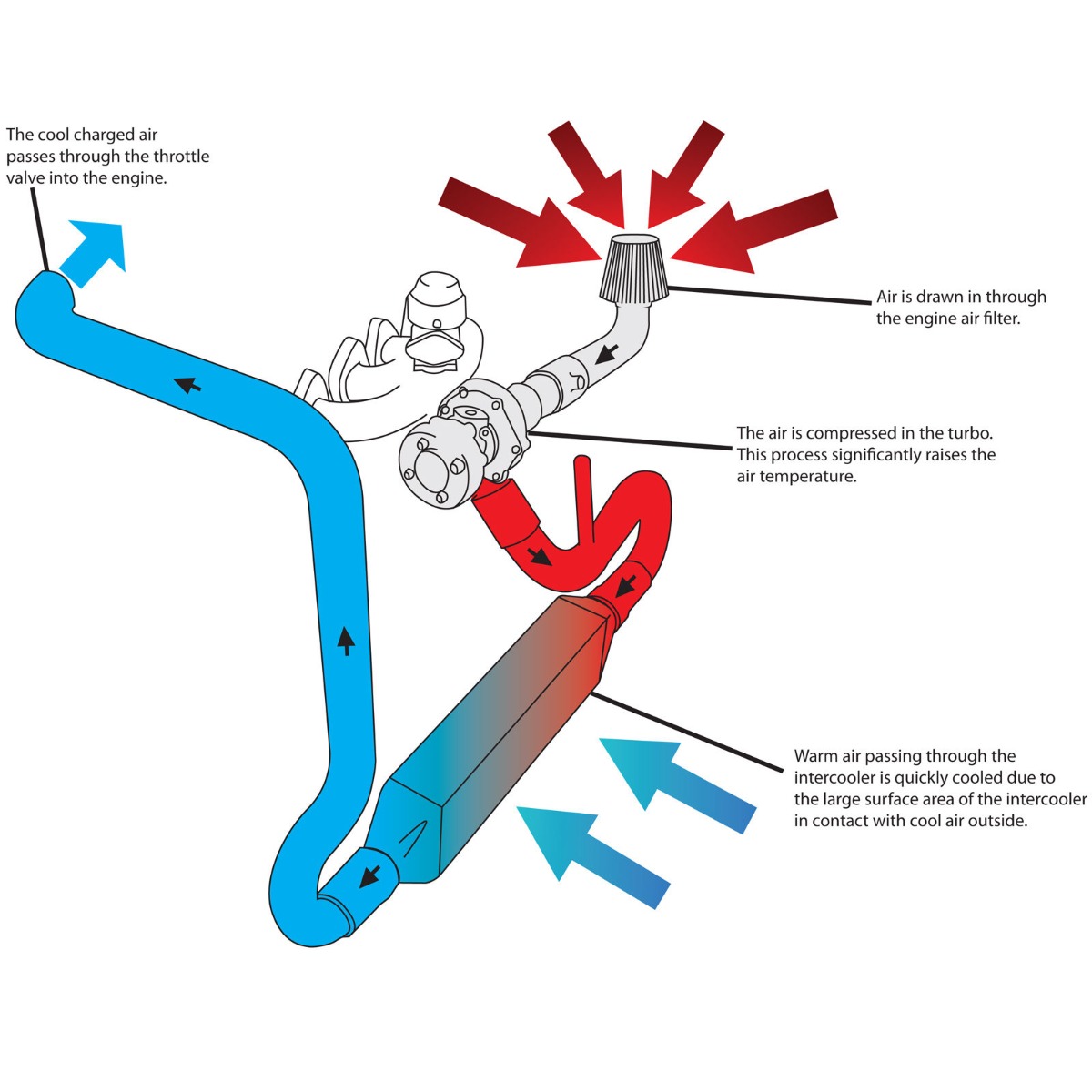 Your stock Audi or VW comes with intercooler(s) sized according to the minimum needs of the system. It will keep the air cool enough to minimize pre-detonation on a stock tune, and not much more. Moreover, stock intercoolers utilize a cheap to manufacture tube-and-fin design (more on that later). The result is a system that while functional...leaves a lot to be desired.

The first notable change of an intercooler is the obvious. Reduce the air temperature. The first and most primary effect is a gain of horsepower through increased air density. When we lower the temperature of the air, we increase it's density. If we flow the same volume of air at incrased density, we make more power! Not only that, colder air is less likely to denonate. This means we can advance intake ignition timing to maximize the efficency of the engine. Many modern ECU's, such as on the MK7, will automatically calibrate and advance timing to take advantage of the cooler, safer air. Oh, and don't just take our word for it. Check out Integrated Engineering's extensive power charts! (MK7R example data)

As noted before, hotter air is more likely to cause pre-ignition, otherwise known as "knocking" or "pinging". This topic is a bit complex, but the high level is pre-detonation puts significant wear on engine components and can ultimately lead to premature engine failure. If you regularly flog your car in a hot climate with the factory intercooler, you'll likely experience engine knock. Cooling the intake air with an upgraded intercooler significantly reduces the chanches of engine knock, potentially saving your engine! Check out this article for a more detailed explanation of engine knock and timing advancement.

I won't benefit from a larger intercooler, I live in a cold climate: False

One of the most common comments I hear is that people "don't need an intercooler" because its "cold where they live". And hey, I'll admit, even I used this excuse for a while. But the fact of the matter is, even with a cold ambient temperature, the amount of heat energy in the intake tract is simply too much for a stock intercooler. Check out this data log. The ambient temperature was a mere 43F (6C). Intake air temperature skyrocketed to 36C (98F), a gain of 55F over ambient! 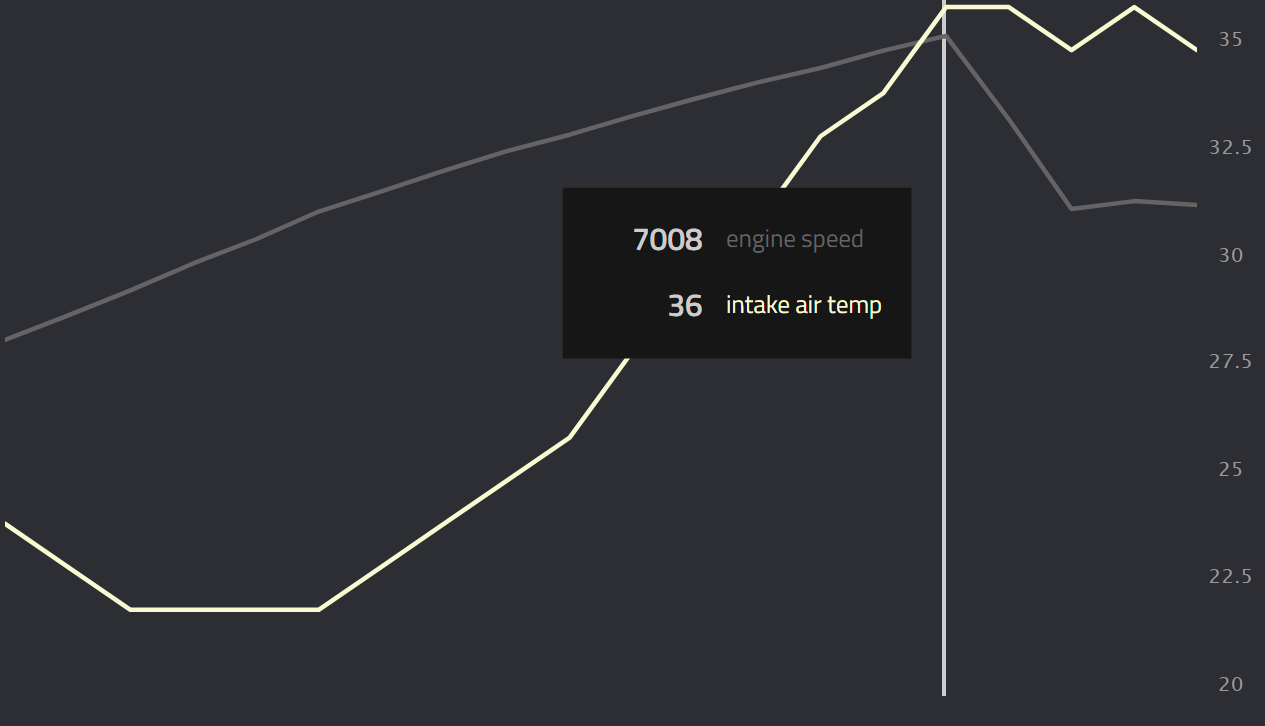 The amount of air your turbo actually flows in porportion to the size of an intercooler makes the size difference almost inconsequential. A 200hp car will flow roughly 20lb/min of air. That equates to 4.5 cubic feet per second. A large IE intercooler on the Mk7 is only ~0.512 cubic feet (90% larger than stock by the way), and that's not accounting for the fact that much of the larger core is fins. In addition, most larger intercoolers reduce pressure drop, meaning your turbo can actual spool more efficiently with an upgraded intercooler.

There are a few corner cases here that should be mentioned, such as front mount options which extend tubing, and twin-intercooler designs which combine a front mount and stock intercooler. If you still aren't convinced about throttle response not being issue, we recommend OEM replacement intercoolers as your best option.

If I only do one pull at a time, an intercooler won't benefit me: False

As we saw in the datalog, a single 3rd gear pull raised IAT's up over 30F! Even for a single pull, the stock intercooler can't keep up with stage 2 tunes.

In addition to core size, further engineering goes into good intercoolers. The first big difference is tube-and-fin versus bar-and-plate. The stock intercoolers are tube-and-fin design, which are cheap to produce, but cause inefficiencies. Not only are they less efficient in terms of cooling, they also cause increased pressure drop. 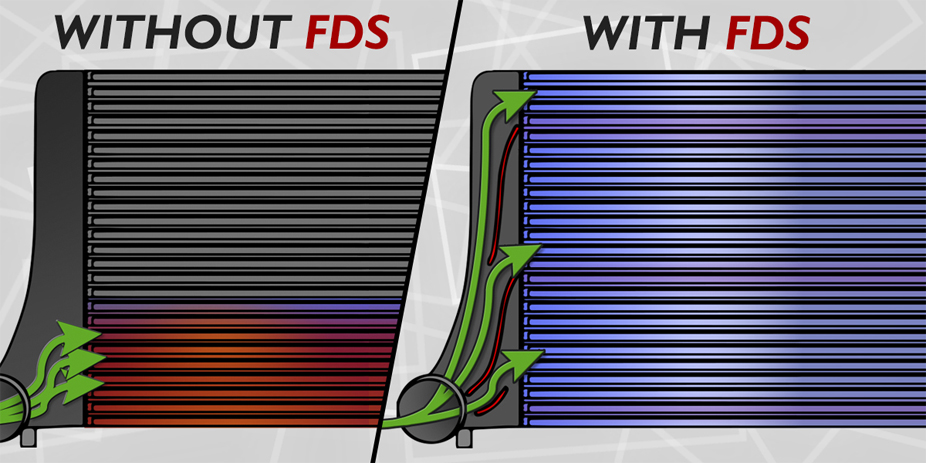 Upgrading the intercooler on your turbocharged car means more horsepower, consistent performance, and safer operating temperatures. Whatever the model, DAP has you covered!