The door latch (lock module) on VW and Audi cars can be a very tricky component. Can also fail in various ways that may not cause you to notice it right away.

A few of the ways to tell if your latch is going bad are:

- System will arm, but door can still be opened after locking(may/may not sound alarm)

- Car will lock when pressing remote, but system does not arm

- When door is opened, does not indicate it in cluster or with interior lighting.

- Alarm sounding for no apparent reason.

- Extended start time when car has been sitting due to the fuel pump not priming when driver door is opened.

This DIY was performed on a 2008 Jetta with an issue on the Drivers (Left) Front door. Repairs are almost identical for the Passenger (Right) front door, just on the other side of the car.

This would be the same basic procedure for the following models

Tools needed to perform this repair:

1. Open the door in question and you will see a black rubber seal/cover running down the door. Shown here in the picture below. 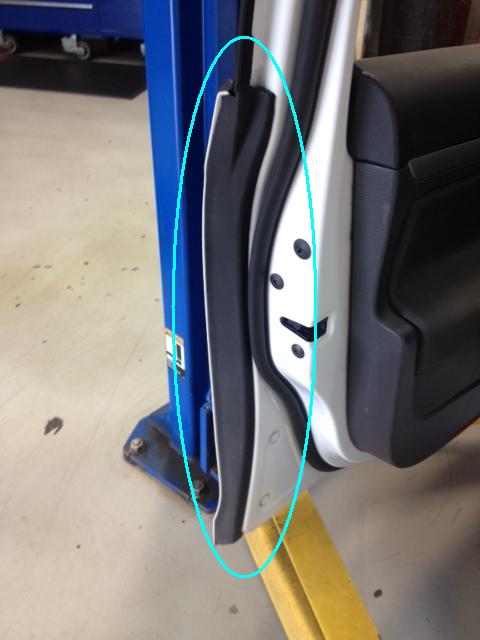 2. Grab the bottom of the cover and slowly pull it out to release the clips that hold it in place. It is pretty forgiving, but keep firm, even pressure on it as you work up the cover releasing the clips. 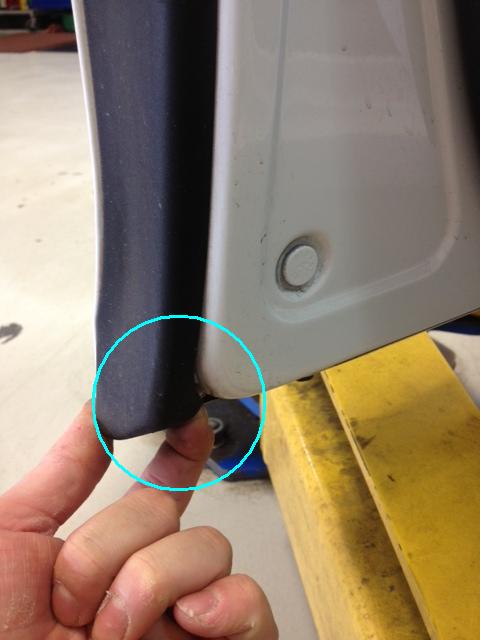 3. Once removed, you will see the bolts down the side as well as a small circle of grey duct tape. You are going to want to remove this tape circle to gain access to the T20 screw hidden behind it. This screw holds the lock housing portion of the handle in place and must be removed for this repair. (Car I was working on had tape piece missing, so here is another picture for reference) 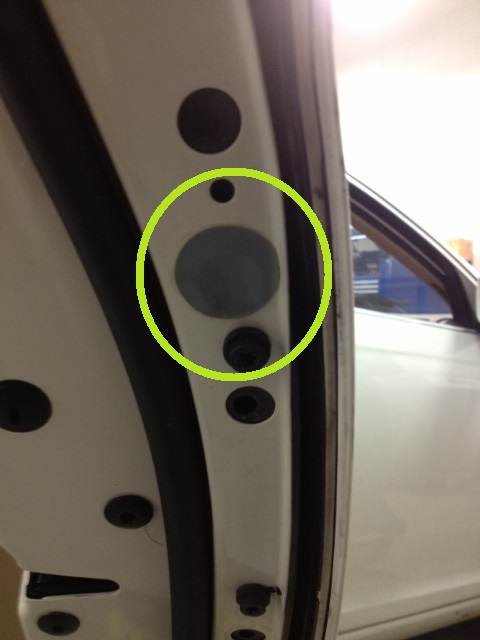 4. While unscrewing the T20 located inside the hole, make sure you are holding out on the door handle. 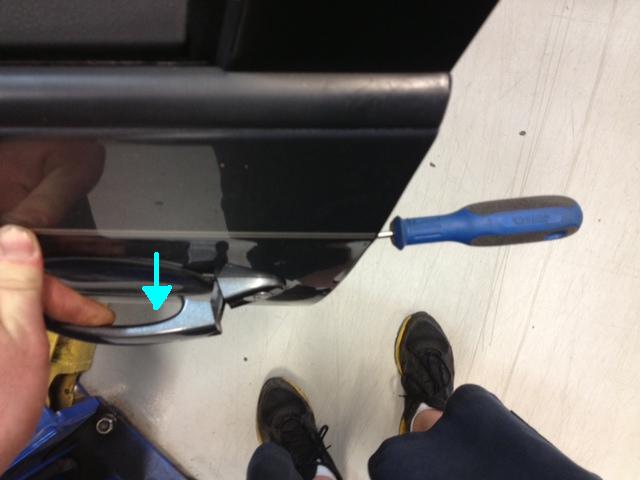 This will allow the locking ring to stay in place while you remove the handle. (DO NOT turn the screw all the way out! As you are turning the T20 to loosen it, periodically check to see if the lock housing is free and will slide out. Unscrewing the T20 all the way will cause the clip that is on the backside of the handle bow to fall off and you will have to assemble that puzzle before re installing). An easy way to tell that the lock cylinder should be ready to come out is to let go of the handle slowly and see if it returns all the way in or is sticking out slightly…..as shown below 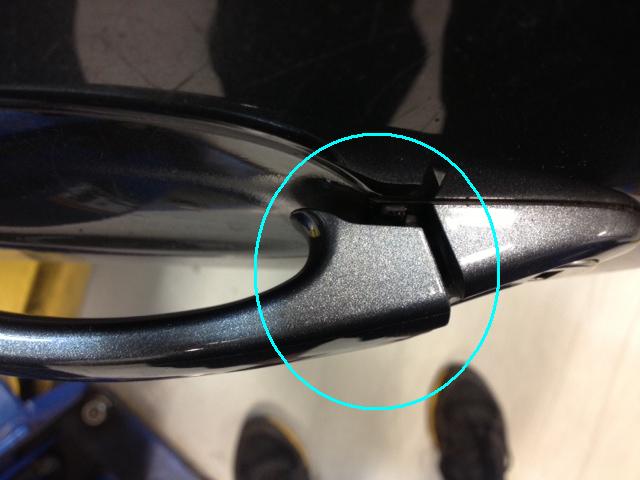 If it is sticking out slightly, then the cylinder should be freed up and ready to be removed. You should now be able to remove the lock cylinder. Just pull it out of the door and set it to the side.

5. Now you are left with the door handle to remove. You can see there is a cable attached to the handle that needs to be removed. 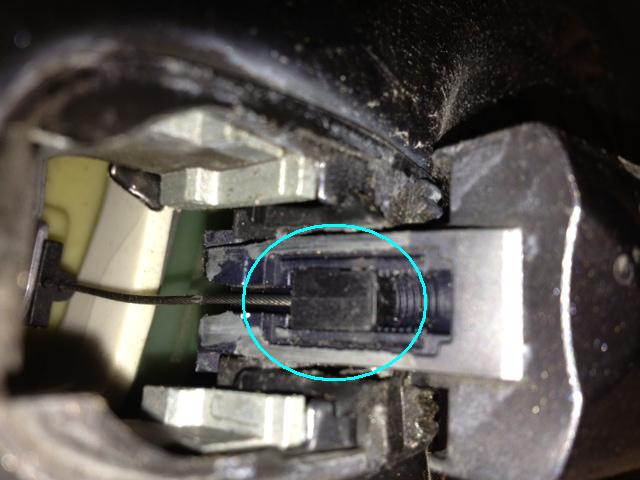 Take note of the installed position of the cable. To ensure the door handle operates properly and does not stick or bind, you’ll need to install the cable in about the same position when going back together. Usually this is installed back towards the inside of the door as shown here.

6. Now to remove the handle. It’s a 2-motion action to remove it that is fairly simple. Step 1: Slide the handle towards the backside of the door, and pull out slightly on the side where the cable was attached……as shown below

Step 2: Rotate the handle towards you and outwards to remove it from the door……. 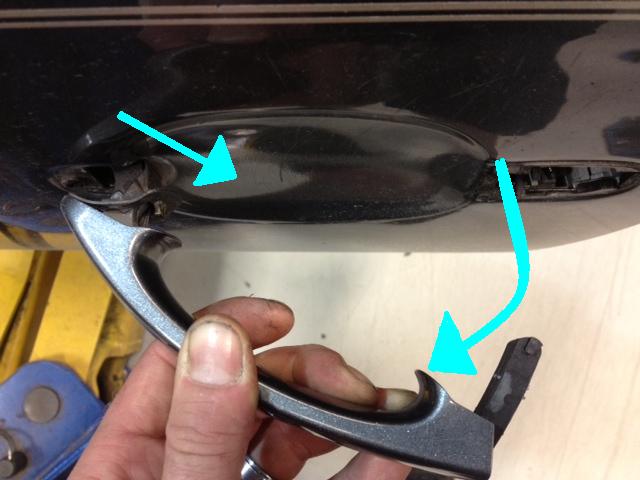 7. Now to remove the begin removing the T30 bolts holding the skin on. There are several different bolts use around the door skin. Placement is CRUCIAL to prevent damage to the holding plates glue to the door skin!!!! Here is a diagram showing bolts around the door and the placement of different bolts.Keep them separate to ensure they go in correct locations. (Note #2 bolts have no shoulder washer. #4 has a pointed tip) 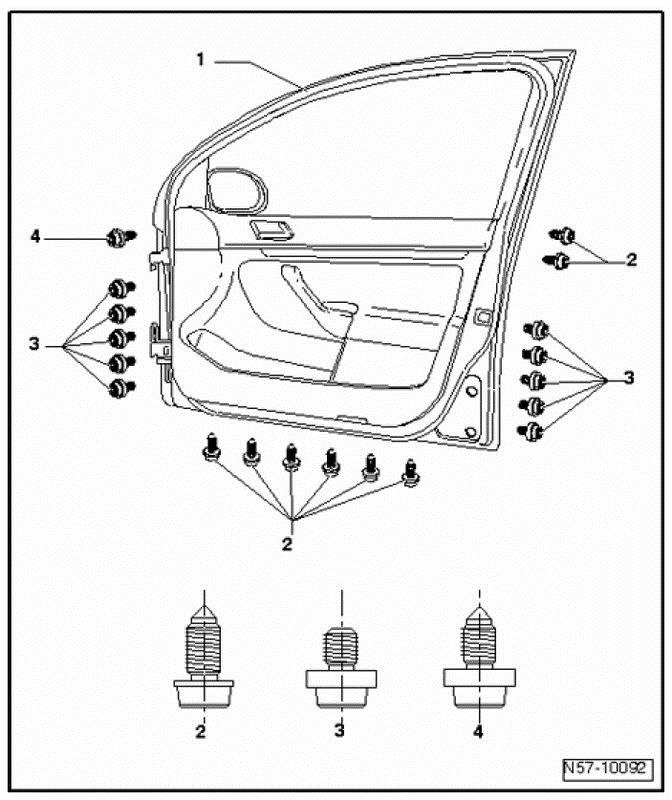 8. Once all these bolts are removed, the skin will be loose feeling, so be sure to have a good hold on it. Or have a second set of hands helping to ensure there are no mishaps causing scratches/dents in the skin. There is one last bolt securing the skin. It lies behind where the door handle was. A small T20 that screws into the door latch bow shown below. 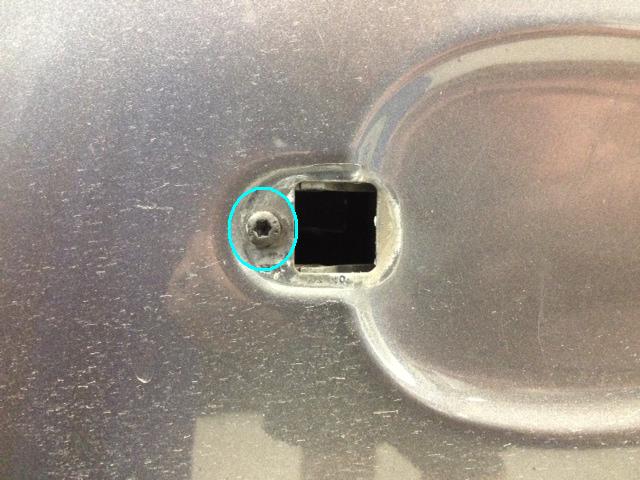 9. Once this is removed, carefully lift the door skin off the shell and set it to the side somewhere safe…..not a good idea to lean it against things as I’ve seen bad things come from that. Lay it flat on the ground(painted side up of course).

10. Now you will be left with a naked door and all the internal workings. 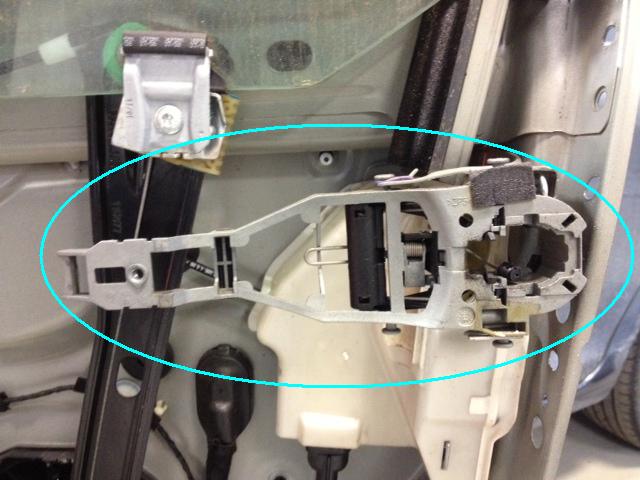 So all that’s left if swapping out the latches. First we need to remove the door latch bow. To do so,there is a purple rubber band holding it to a little hook. Carefully remove the rubber band making sure not to break it. 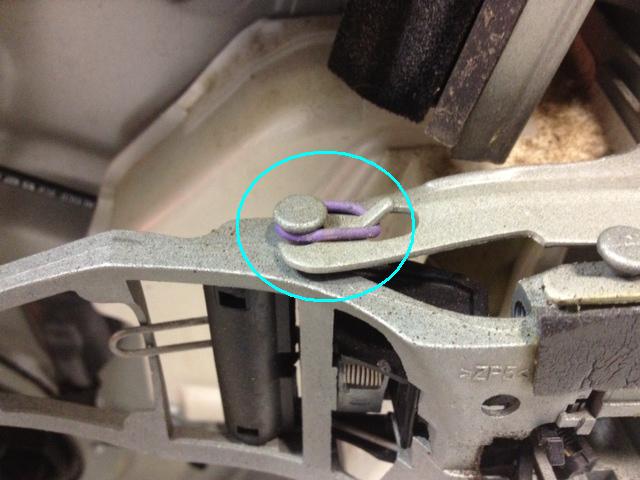 11. The connector on the driver latch is backwards and can be tough to disconnect without damaging, so I do so after loosening the latch and swinging it out for better access. 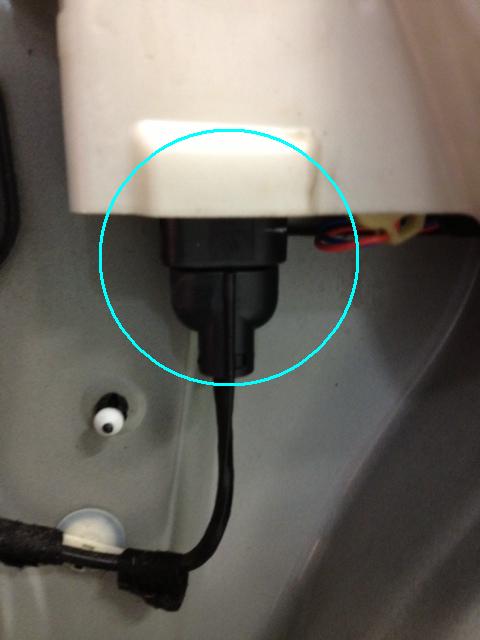 12. There are 2 M6 triple-square bolts that hold the latch in place on the backside of the door frame. Shown below

13. Once these bolts have been removed, the latch will still feel somewhat attached.That is due to a claw that the latch is slid down on to. You must now, lift up slightly on the latch 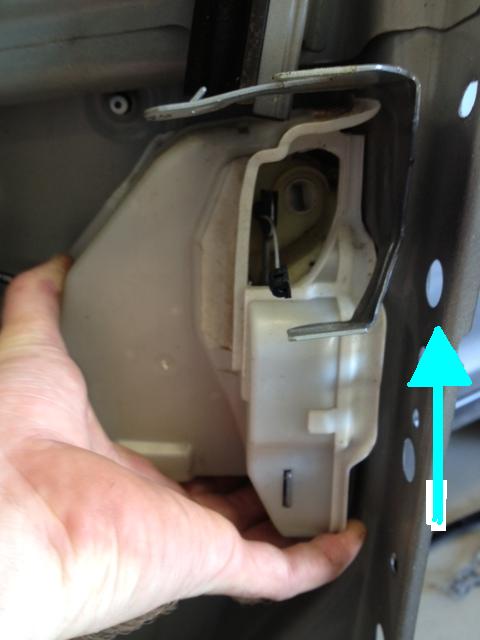 electrical connector to disconnect them and free up the latch. 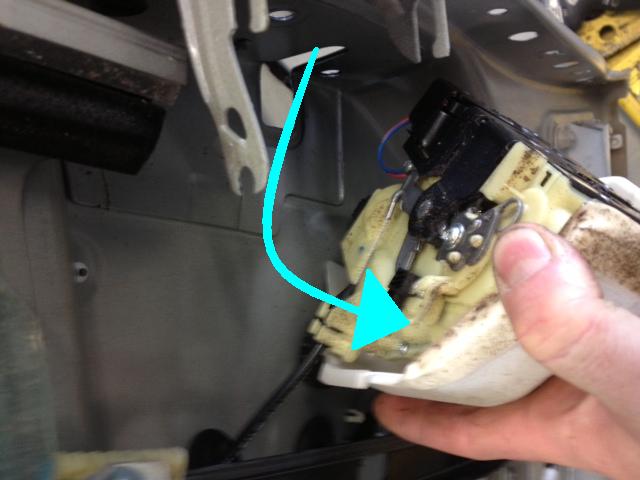 14. The latch only has 1 electrical connection on it. It is a typical VW-style connector. Using your thumb or a small pick/screwdriver, release the lock and slide the connector down off the latch. 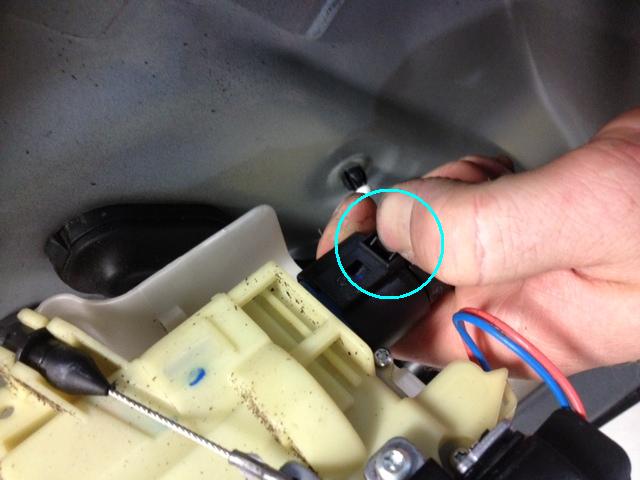 15. Pop the black cable lock out of it’s holder. 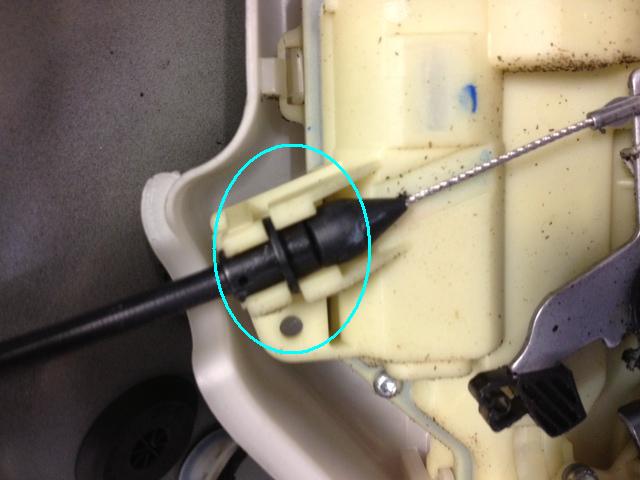 assembly and cover. Once this is free, you should now be holding the door latch in

your hand separate from the door. 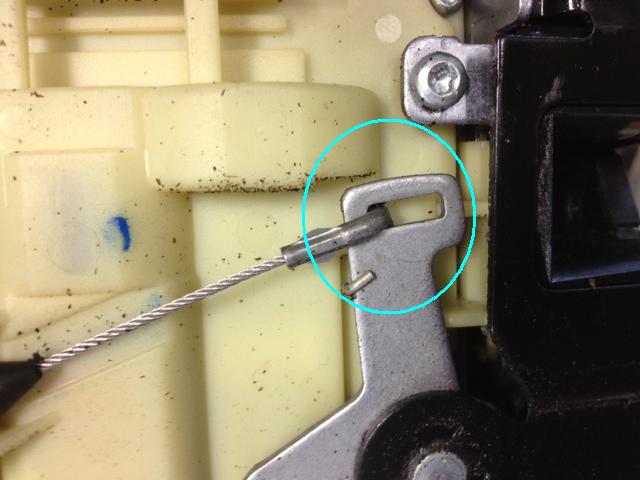 16. What is the white cover/shroud around the door latch for you may ask? It’s annoying to work around, but does serve a purpose. This makes it harder to someone to break into your car with a “Jimmy Stick” by covering the latch as well as keeping the electronics dry from water that runs down between you glass and seals. The cover is held into place with 3 clips….shown below 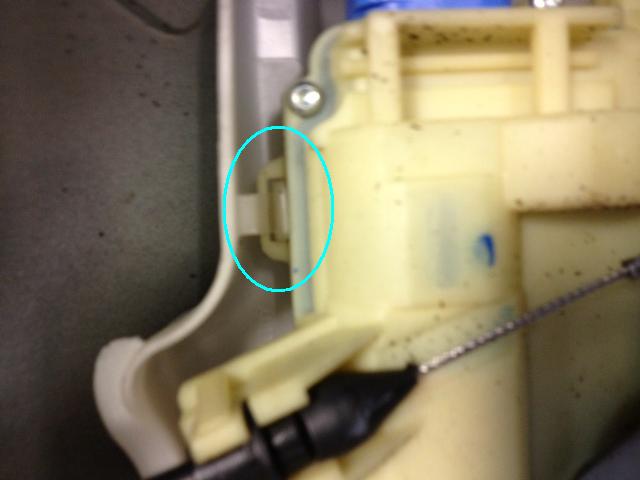 Once these are popped loose, you can separate the old latch from the cover and

begin the reassembly process. You should be left with this image of the door latch

and the water shield. 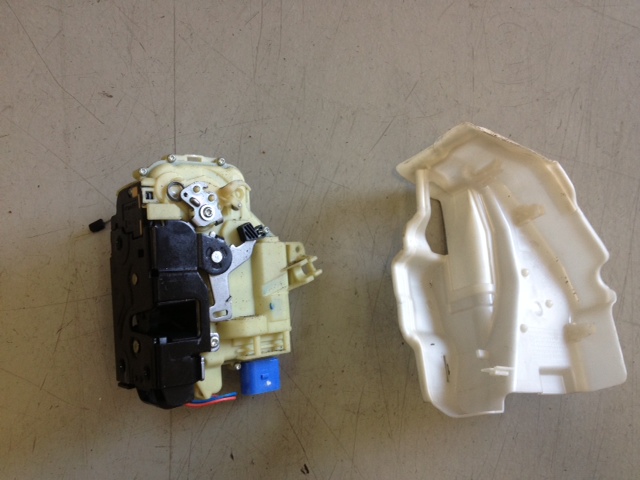 17. Be sure to swap over the cable release for the door handle pull. To do so, rotate the cable so it is pointing straight up in the air and slide it back towards the latch. 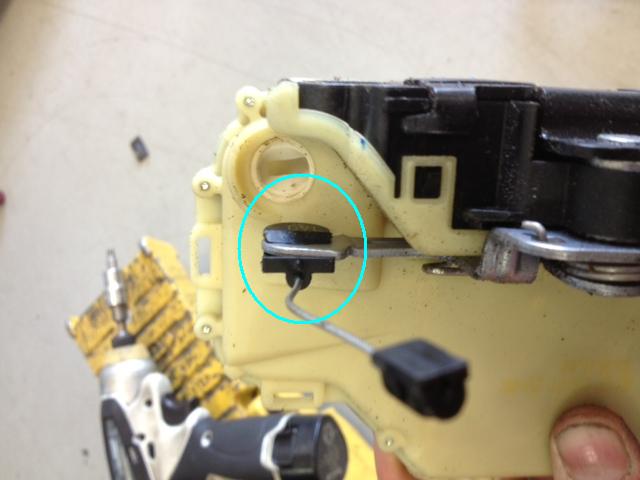 When reassembling, it is important to note how the cable was installed that hooks to the door handle(This is the short 2.5” cable with lock on end). Here is another image for installation reference just to drill it in your head……. 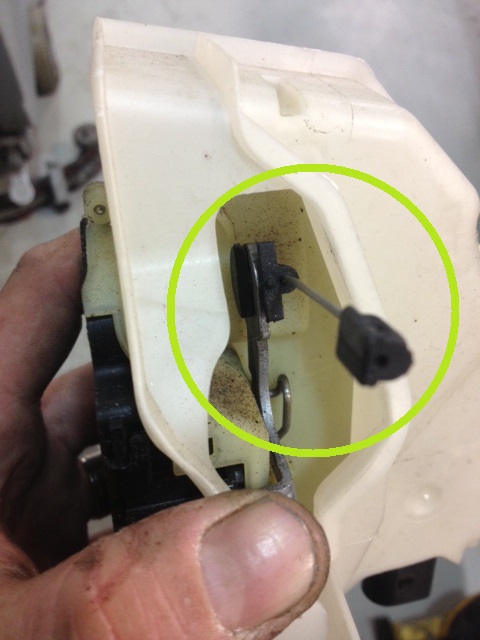 18. Reassembly is in opposite order of tear down. Once latch is installed back into place, just install door skin and have someone hold it in place while you start all the bolts. Use the old marks from where the door skin bolts were as a guide so that your body lines will be as close as possible with minimal adjusting required after you are done. And remember to install the bolts in the CORRECT LOCATIONS!!

19. Also make sure that all the little black clips are in place on your door guard and not still stuck in the door. 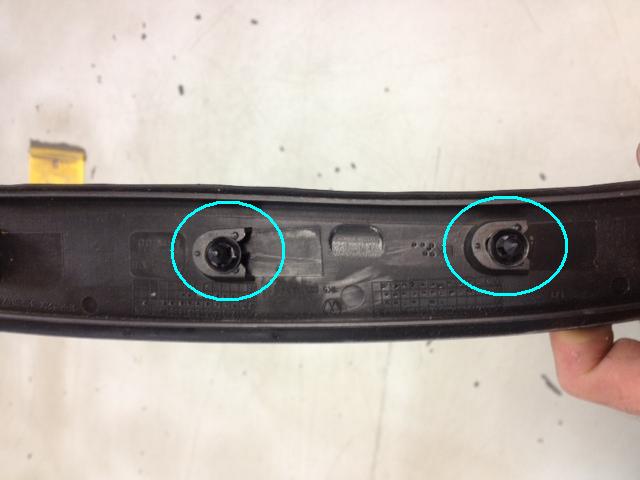 20. Once completed, make sure the handle operates as it should by opening and closing the door to make sure it doesn't bind and the handle releases on first pull.Also check the door alignment with the front/rear gaps to make sure nothing is rubbing or hitting. Re install your cover over the door bolts in rear section and you are done.